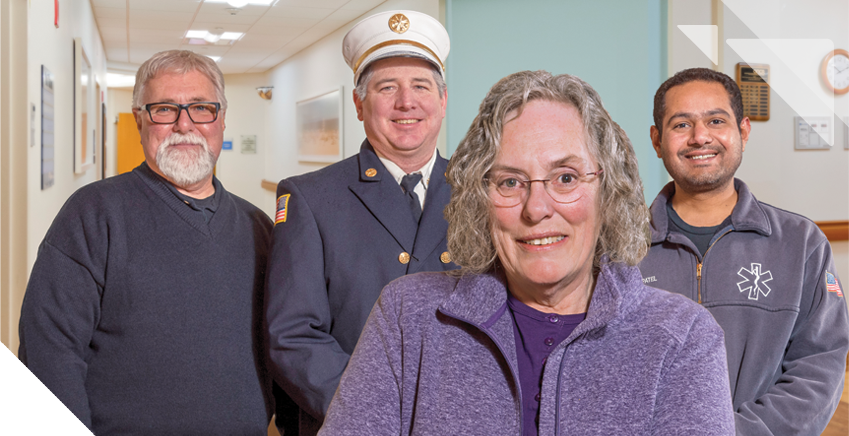 Patricia Johnson has been happily married to her husband, Jim, for 46 years. On Tuesday, November 21st… just before Thanksgiving… Patricia was preparing for a big family gathering: cleaning, cooking, and speaking on the phone with her daughter who was coming down from Boston with her children for the holiday.

Patricia started having what she interpreted as a touch of indigestion, but it soon turned into a sharp, pounding pain, accompanied by shortness of breath.

“It felt like I had been hit in the chest with a sledgehammer.”

The pain radiated up to her shoulders and down both arms. She called out to Jim for help, and he promptly called 911. As they waited for the ambulance, Patricia thought, “What an inconvenient time for a muscle spasm. I have so much cooking to do!”

As Patricia found it progressively more difficult to breathe, she realized she was experiencing more than a muscle spasm. It had come out of the blue. She lived a healthy life. She had no history of heart problems. There had been no warning signs.

Patricia’s hospital of choice is Peconic Bay Medical Center. When her children had been in school, the hospital’s emergency room had seemed like a second home. She knew many of the ER nurses by name.

When she arrived at the hospital, she was taken immediately to the Kanas Regional Heart Center’s new Cardiac Cath Lab, where the doctors and staff were extremely nice, calming, and comforting. They told Patricia what to expect, and kept her informed about what was happening throughout her experience.

The cardiologist in charge of her procedure was Dr. Lederman, who explained in detail what he was doing while he used a catheter to insert a stent into one of Patricia’s coronary arteries.

Although Patricia was undergoing an active heart attack on the table while the catheterization procedure was in process, she remembers observing the procedure on the big-screen LCD monitor above her, and thinking, “Jim would love a TV this size!”

Patricia says Dr. Lederman and his staff were so nice, so very reassuring during the procedure, explaining each thing they were doing every step of the way as she was watching the monitor. She was coming in and out of consciousness during the procedure, but she remembers it as “quick and easy… for me at least.”

While she was in the recovery room after the procedure, Dr. Lederman told her he had inserted a stent to reopen her coronary artery, which had been 98% blocked. She had suffered a STEMI (ST-elevation myocardial infarction), often considered the most dangerous kind of heart attack.

When Patricia started feeling pain in her shoulder on Thanksgiving evening, Jim took her back to hospital, but this time it actually was a muscle spasm and nothing more. She was seen by Dr. Heller, a colleague of Dr. Lederman. Dr. Heller was also very kind, reassuring, and comforting. Both cardiologists were excellent communicators, and gave very clear explanations of what had happened and what Patricia could expect going forward.

“I don't know what would have happened if there wasn't a facility like this so close," said Patricia. "I might not have made it."

“I especially want to thank the EMTs from the East Quogue Fire Department’s Rescue Team,” said Patricia. “They kept reassuring me on the way to the hospital, and they waited to make sure I was going to be alright. The cardiologists, P.A.s, nurses, and techs at the hospital, too—they were all so friendly and comforting. They kept my husband calm when I was having my catheterization. They answered all our questions. They were so supportive.”

Patricia has since returned to her normal, daily activities. “There have been no problems. I’m extremely happy. Dr. Lederman says I can live a normal life, and that he will see me in six months.”

Although Patricia and Jim had been living an active, sensible and healthy lifestyle, they are planning to pay more attention to issues of diet and exercise.

"If I had any advice for others," said Patricia, "it would be that a heart attack can come out of the blue. If you're in doubt, get it checked out."

Announcing the regional heart center for the East End